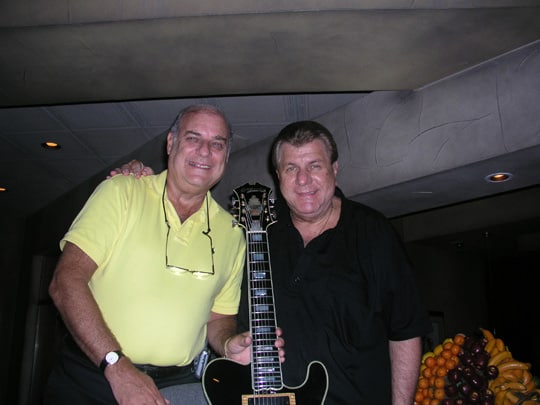 On a recent visit to Las Vegas I had the opportunity to catch a three hour set of Bob Conti’s solo gig at Ventano Italian Restaurant about fifteen minutes from the Las Vegas Strip. Much has been written about Bob, and after seeing him in person I can say that all of it is true. . .

Playing an 8 String guitar with the 7th string tuned to a low B and the 8th string to a low F# (with a neck that seemed to me the thickness of a Louisville Slugger and a wafer thin pick) and having over 3,000 tunes at his fingers, Bob never ceased to amaze me. A consummate performer on ballads, swing, bossa and just about anything else you can throw at him, my three friends, who joined me for the evening, were enthralled by his talent.

I was so impressed with his chord melody style that I asked him if he had time for a lesson before I left town. We met at Ed Roman’s guitar store for an hour and a half of superb instruction. If you get a chance to see him in action don’t miss him. If you need to study with someone who can understand what you need and can explain it easily, then study by mail or get to Vegas for some private lessons. This guy is incredible!