Someone who teaches how to play rather than memorize. What a concept!

I am a retired (EARLY retirement!) university professor and administrator who taught music criticism at the graduate level. I've also been a practising musician for over 40 years now. Although I have played in jazz bands for years, I restricted myself mostly to comping until I discovered Robert Conti's column in Just Jazz Guitar, and then his terrific materials on chord melody. I was delighted with the DVD of The Formula to finally be able to see and hear Mr. Conti. His down-to-earth style of instruction really resonated with me.

I just love all the material presented. I have all the Source Code and Ticket to Improv series. Even though the TTI series is an introduction, I find that coupled with The Jazz Lines you can find endless ideas from those "simpler" lines presented. I really think I've seen other people imitating the approach Conti has used for decades. The problem with theory is that many students don't understand how to apply it. Robert demonstrates that theory in real world application. Anyone who understands theory can analyze Robert's lines and see how that theory works in real playing. I think Robert understands theory as much as any music theory teacher, but he also knows that on the bandstand the mind doesn't have time to compute all that information when chords are flying by at break neck tempos. He just presents things that make sense to the mind in real time playing.

Robert Conti has a good book/method called the Chord Melody Assembly Line. It's been many years since I looked at it but I remember it as a straight forward, easy to follow approach that gets you playing quickly.

H
The Formula Hinton Owens - Georgia
He is a gifted educator

Use Coupon Code: FIRECRACKER22 At Checkout

To The Brink! Review in Jazz Improv Magazine 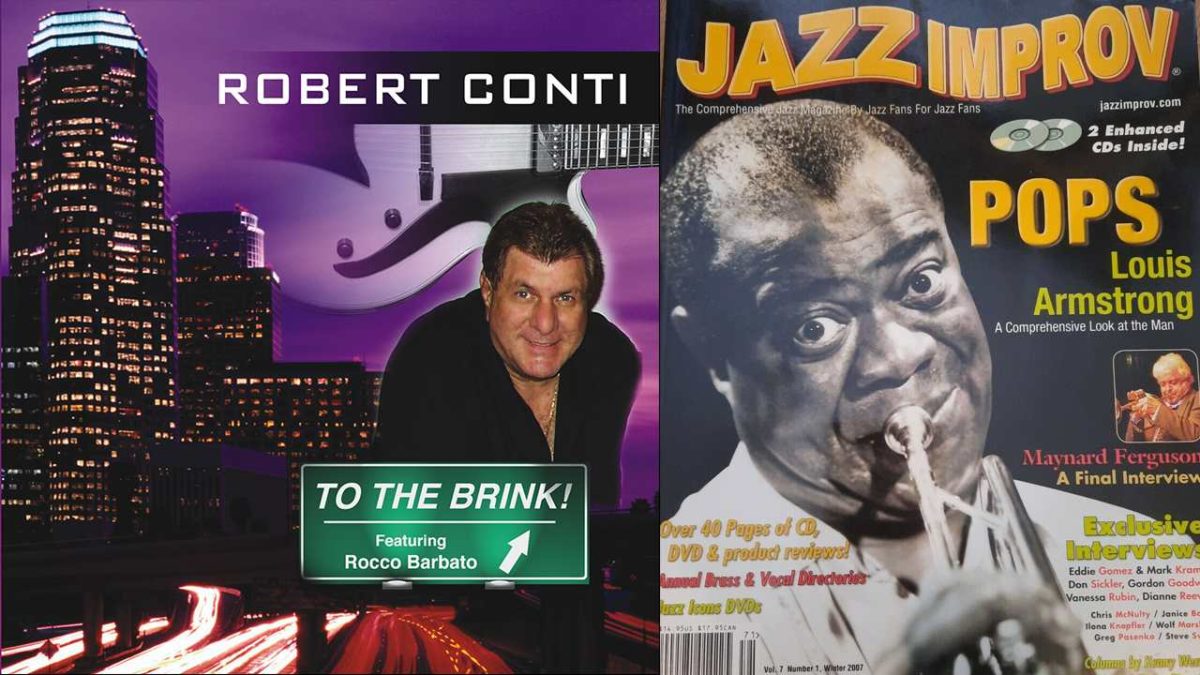 Robert Conti has been a name notorious in the guitar world for years. Robert is known among guitarists as a very prolific composer, clinician, and educator. Robert’s credits include a series of instructional DVDs/videos and books much sought after by any serious guitarist. Robert has, blazing chops combined with musical taste.

Robert starts this original composition with an incredible fire. The composition is appropriately tiled with all the energy of taking great musical ability to the brink. Robert shines with a diverse and interestingly array of technique. The head is played with guitar and sax. Robert starts off his solo in a blistering array of chops and doesn’t let up until he releases it to Rocco Barbato who then takes the bebop lines that Robert threw out and continues with a very soulful solo. Billy Moran follows with a wonderful and soulful organ burning solo as well. Of course, Aldo Bentivegna follows with incredible chops and an interesting drum solo that would make any drummer stand up and listen. Robert and Rocco trade off of each other for several choruses (see video below). It seems that neither is at a loss for ideas and each spurs the other on to take chances.

This Mark Stefani penned composition is a Bossa Nova that is tasteful and well executed by Conti and his band mates. Again, Rocco Barbato tastefully weaves a beautiful solo, but now on the soprano saxophone. The sound is one that is well suited for this Latin number. Robert plays a solo reminiscent of Pat Martino type feel. There are some very funky moments throughout a la George Benson as well. Robert blows through with a quite impressive array of double stops to push the solo forward. All said and done, very impressive.

This original Robert Conti selection is a blues that swings hard and funky. Robert chooses to incorporate a beautifully mastered use of impressive funky style techniques that reminded me of Howard Roberts on the Goodies album. Robert also effectively uses tritones double stops as he comps very nicely behind Rocco and Billy’s solos. I have to say that Robert’s sensitivity and feel are evident as a true blues man. The feel is an extremely relaxed feel.

Robert takes this well know standard and does a beautiful rubato solo melody and chord up until the rhythm section joins him for this very pretty ballad. The harmonic choices are especially unique especially in the lower register of the guitar. Again, Robert’s sensitivity comes through in a very relaxed and calm way.

This is another one of the brilliant Mark Stefani’s compositions. This has a Henry Mancini type theme that has a haunting melody. Robert delves right in with all the confidence of a true master. The use of Robert’s whole tone lines is very effective and appropriate for this tune. Rocco again delivers a soulful solo with Billy’s first class organ solo pumping up the fever for more inspired soulful type licks. A very serene and relaxed song.

Robert shows his strong blues background on this original Conti composition. Many jazz guitarists approach the blues from strictly a jazz upbringing. The problem with this is that they miss that authentic blues development in their feel and soul. Not Robert, Robert obviously has spent quite a bit of time in this arena. The blues lines certainly are those of a seasoned blues player playing over the blues. The funk double stops are very tasteful as well.

Our Love is Here To Stay

Robert takes a slow rubato approach to the head with his strong use of harmony, bass lines and wicked technique to open up to this beautiful rendition of this Gershwin standard. Robert swings hard to a backup of brushes and organ stops. Robert’s technique is relentless. Robert’s knowledge of chordal arranging and single line playing during this song and all of the CD shows that he is a master jazz guitarist.

Another of Robert’s original compositions on this CD, Mister Twister’s Fanfare again shows Robert’s talents as a composer with interesting melodies and nicely placed harmonies against a slamming back beat. Again, Robert pulls out all the stops. I believe that this is a showcase for Robert’s soulfulness and amazing chops. Robert’s command, and I do mean command of the guitar is very impressive.

Again Robert takes this original Conti composition to a very high level. Very wonderful listening. Overall, Robert Conti’s CD, To The Brink! does just that. Robert and his band mates take you on a fabulous and soulful ride to the brink. Robert is funky, dirty and a mean street player. This CD is well worth adding to anyone’s collection of great jazz guitarists. Robert Conti is just incredible!! 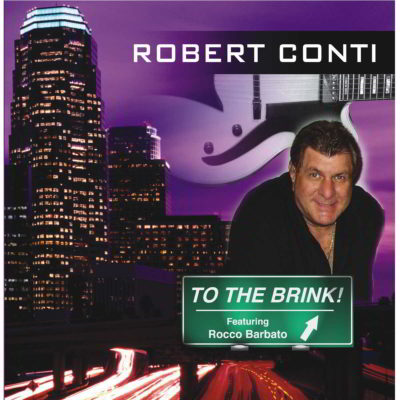 Order To The Brink! Here