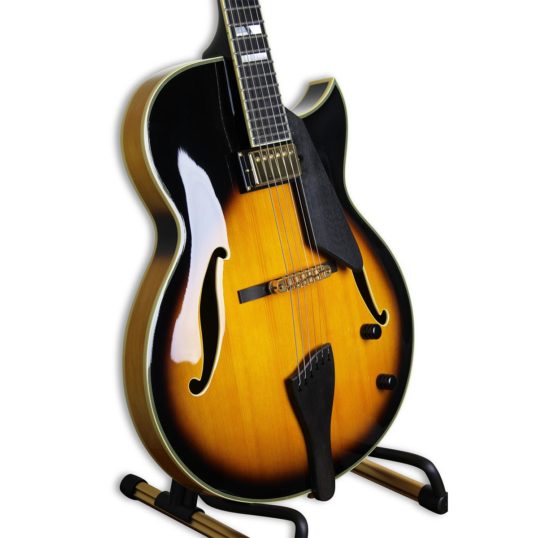 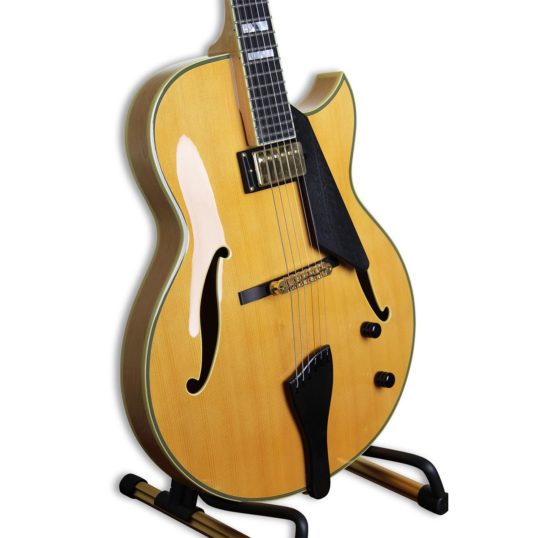 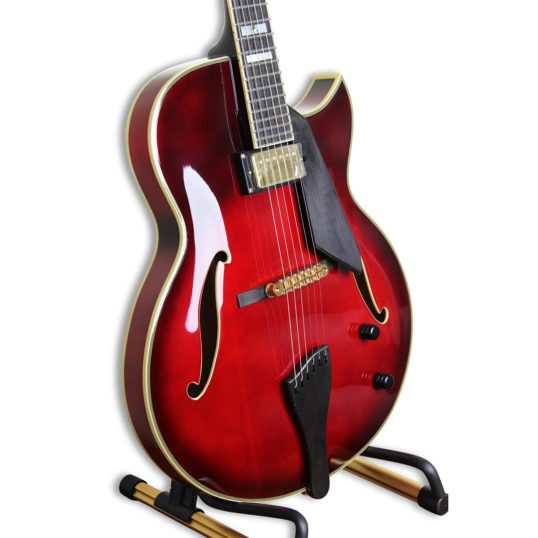 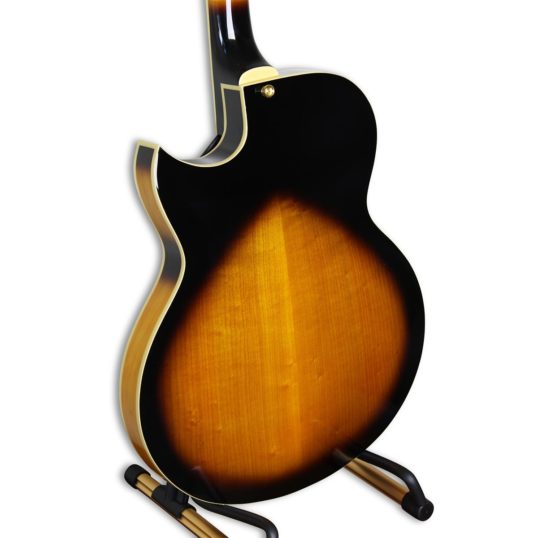 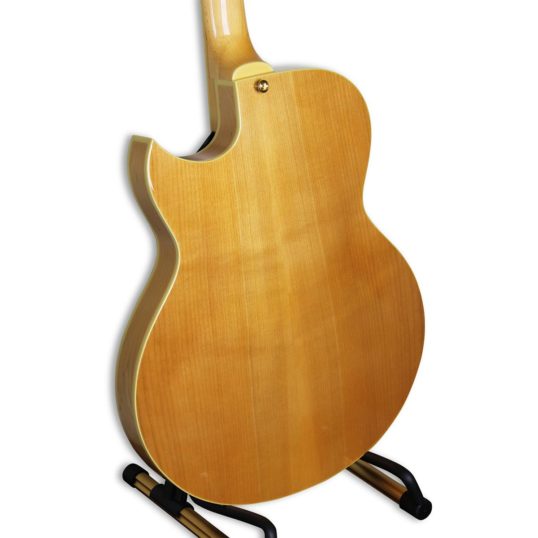 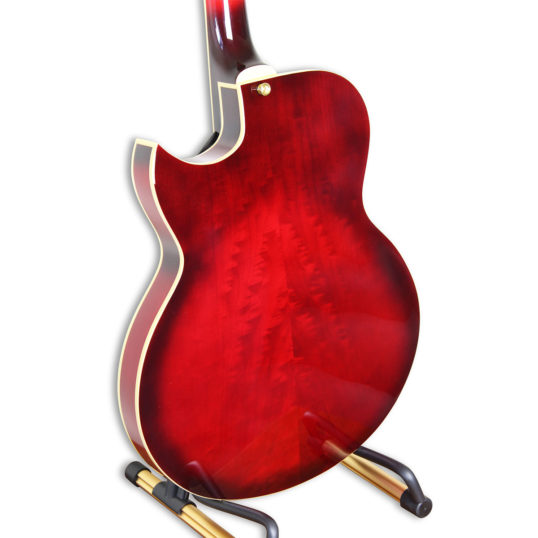 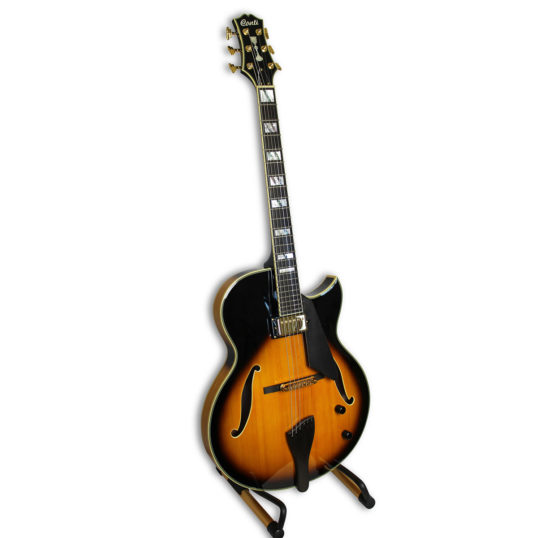 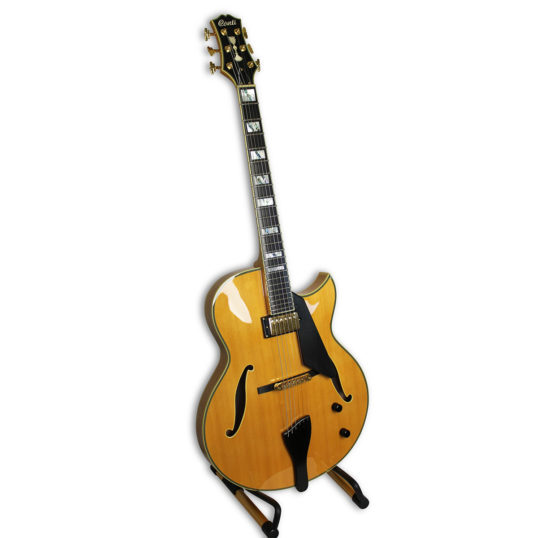 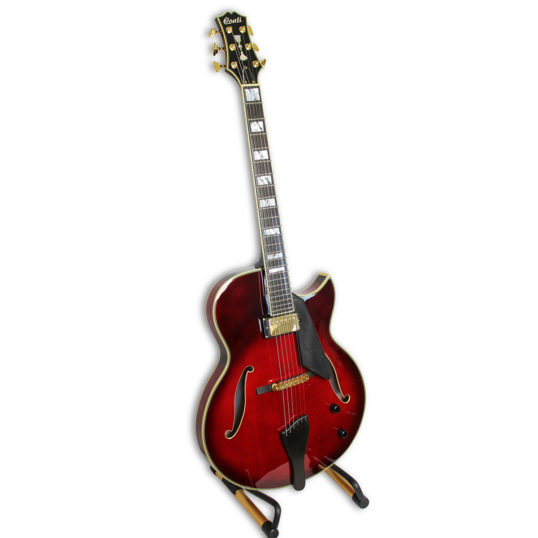 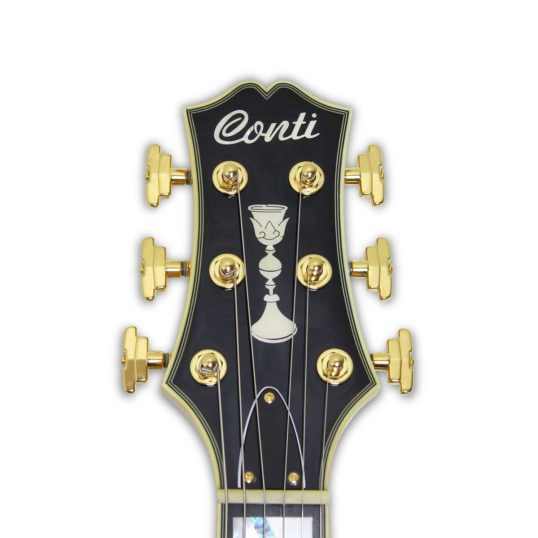 Solid Spruce Top, Solid Maple Back and Sides, Ebony Fretboard and best of all, it’s got the Conti name on the top. The player’s dream guitar is back with the new Heirloom model.

For more detailed specs, photos, videos and owner comments from around the world, please visit our dedicated website for the Conti Guitar.

Thank you for allowing me to get your beautiful guitar “under my hands.” I love it, and I also love your courses. The video about my new guitar was wonderful, I thoroughly enjoyed the personal touch, and it pumped my excitement about getting that guitar to a whole new level.

Below, I have typed a brief summary of my personal journey, and if it is a bore to you, please just toss it out the back door. Things you say in the lessons, have taken me right down memory lane.

After the first year of sight reading, I asked the teacher to teach me Rock n’Roll. It was 50’s Rock for awhile, Boogie-woogie, Steel Guitar Rag, (I-IV-V) and since Country Music was always in the house, a bunch of that too. Elvis, blah blah.
Older Cousins would come by, teach me stuff, until I passed them up and started teaching THEM stuff. We did some porch picking, and I figured out some Chet Atkins fingerstyle, on and on.

I would sit out on my porch and play for the whole neighborhood (that means loud) with a little bitty Kalamazoo Amp and my new hollow body, sunburst Conrad Electric. Then along came the Beatles, which everyone liked at the time. When I hit the drug scene in the early 70s I was fascinated by Hendrix, Zeppelin, and all that. Hendrix though stood out, and his stuff was difficult. Then I was playing for the neighbors with a double Marshall stack and the stereo on full blast!

Guitar had always been my escape from the family drama; locked in my room, for hours I would just play and figure stuff out. I used the turntable, and raised and lowered that needle over and over and over, sometimes just to catch ONE NOTE.
Then ‘where on the neck is he doing that?’ ‘Is that a hammer on? Or a pull off?’
Consequently, I developed an ear from Mars!

I would have licks running through my head and then “ah HAH!” I would run to the guitar and play what I had envisioned, and there it was! I finally had it figured out.

So, I went into the military in 1976, still playing, but it was disco times, zzzzzzzz. So instead, I got into Jeff Beck, which is a kind of Jazz-infused classic rock; sorta. I plunged into deeper theory, melodic patterns, so forth.

I had about a 10-yr. Respite from guitar, got married, traveling, etc. But meanwhile, I learned piano, organ, and more. Music is the same on any instrument, so why not? Then, I started building guitars too, since I couldn’t afford a good one, and that rekindled my love for guitar, and I said “how could I not be playing? Now I have a nice collection that I didn’t build, hahah.

I went into ministry in 1979, and that’s been my calling, but before that I was on the musical path. Now, years later, I’ve taught choirs, singers, performed in quartets, solo stuff with my wife (who sings) and all that churchy stuff. None of the contemporary junk. Even writing and recording music, but I’m just a hobbyist.

I’ve been teaching and trying to help people with their music in various ways for years, conveying what I can, with my limited understanding of things. As I began to dig into your lessons at last, I’m discovering wonderful stuff, stuff that makes ALL KINDS of sense to me. Especially the part about the technique, and realizing some problems, even after 50 years, with right hand picking. I am truly THRILLED with what’s happening.

Some things you are saying are giving me ah-Hah moments, because I have stumbled upon them over the years, and they align with what I have discovered.
I have ALWAYS played in chord shapes up and down the neck, and used fingers that were just standing around doing nothing, to add notes and form melodies, along with those chords. I have told people for years about using inversions, and hearing that melody note on the top, even on a piano. I never realized I was doing Chord Melody playing, I just ‘did it.’

Also, I’ve taught them that modes are just the same 12 notes; that there are ONLY 12; a mode is going through them in a different pattern, like steps in stairs, climbing by twos, or threes, whatever. I totally agree with you on modes and scales. Just play.

That Alfred’s teacher loaned me a book called “5, 200 guitar chords.” I eventually figured out that there are only a handful of chords (basic shapes); all the rest, are simple modifications of them.

As a kid in the beginning, I thought “I’ll just be a rhythm player, I can’t play lead.” But I would noodle around while guys played rhythm, and I sorta figured out which notes I could touch, and which ones to leave alone! I HAD TO BE LEAD man after that. I had never heard of “modes,” but I was using them.

“The guitar was delivered today and everything is as I thought it would be – feels and plays great, machine heads are smooth and accurate. I was surprised at the pick guard position because it is perfect, making it so comfortable to play; my other guitars are not like that. The guitar looks gorgeous. Thank you to you all from one happy boy.”

D
Donald Olson - Ashland, OR
The guitar is perfect

“Attached is a photo of me with my new Sunburst Heirloom and my original Ruby Red Equity. Besides the Equity, I have used many of the Conti teaching materials over these last few years, ever since I first encountered Bob in “Just Jazz Guitar” magazine. I appreciate the help and advice as I decided whether to buy the Heirloom. It arrived at my Oregon home in just two days. It was well packed and needed nothing but tuning to be play ready out of the case.

The guitar is perfect. The finish is beautiful. The hardware is clearly high quality. I am impressed by the sound quality even when it is not plugged in. I am really pleased by the slightly smaller lower bout; it relieves some strain on my shoulder. Finally, the video of Bob playing my guitar and telling me about it just before it shipped was wonderful. It was like I was in the studio and felt very spontaneous. My regards and thanks to Bob, you, and the whole crew.” 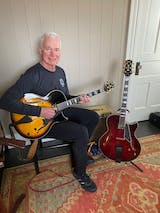 S
Scott Verville – St Augustine, FL
The Do It ALL Guitar!

“I’ve been playing professionally for over 30 years now, 20 of those as a Navy musician. In all my years of playing, I’ve longed for that one guitar that could cover numerous styles of music, and this is IT! This guitar can cover jazz, blues, rock, pop, country, you name it….. from a quaint solo/duo setting, a small jazz combo, to a blistering rock band, all the way to full big band playing Freddie Green style, this guitar can cover it all.

Not only is this guitar versatile, but it looks and sounds amazing, and plays itself! That’s because this Conti Heirloom is made with the ﬁnest woods and electronics available today, the craftsmanship in the build is second to none, and they have a professional luthier that sets it up perfectly before it goes out the door. Then as one last step of quality control, and this is the coolest part, Mr. Conti makes you, the customer, a personalized video of himself playing your guitar which adds such a great personal touch to this whole experience. Thank you Mr. Conti and Mike for not only making this one of the most pleasurable buying experiences, but for delivering me my new favorite guitar.”

Wow , I am taken aback not only by the beauty but also the amazing tone of this guitar.I own 6 archtops of the highest order but must admit that this model compares very favourably with guitars which cost many times the price and some.
What more could a jazz player ask for,it looks great,sounds great in any position on the neck,solid carved woods,top quality hardware,fantastic size for maximum comfort,perfectly balanced,the list continues.
Forget the big names and get yourself one of these superb instruments.
You are going to be stoked.
Then all you need is to buy the products and you are well on your way to discovering the exciting and fulfilling world of jazz guitar taught by a Master Musician.
My hat's off.

Thank you so much Mr. Conti. I am very excited to start practicing with this guitar and hopefully showing it off at some jazz gigs in the near future. I am very grateful that you were able to personally go over the optimal conditions for the life time health of the instrument as well as the features.

I must admit, the guitar sounds and chimes are breathtaking, each note is tuned to perfection! Once I plugged it into my amp and played that first Gma7, I knew right away that this is a “surround sound” instrument. The light reflecting off the gorgeous Antique Sunburst color creates a warm, welcoming atmosphere to the listeners. This is meant to be played in front of a jazz audience, big or small! It feels like I am playing an epic, ancient artifact at times! What an absolute pleasure to explore chords and melodies with this luxurious instrument. You just can’t get a better sound than this. Many thanks to the Robert Conti team for the complimentary video and I will continue to tell it’s legendary tale through YouTube!

Thank you once again, and I look forward to continuing my studies of jazz guitar and the Robert Conti method.