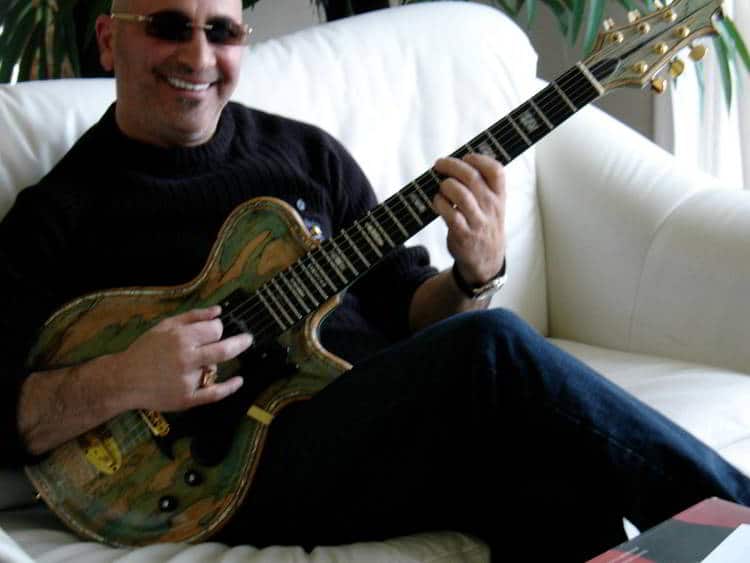 In recent weeks, I have had the pleasure of reconnecting and speaking frequently with my friend, Master guitarist- Bob Conti.  Bob & I met 15 years or so ago in Vegas where he was performing. I went to the club and introduced myself as a friend of PM’s. It was a memorable night – one I will never forget- great music, some good Italian food and wine, and talking guitar with a humble and generous jazz giant. I should mention that Pat & Bob grew up in Philly together. Both young guitarists hit the jazz circuit playing clubs in their … 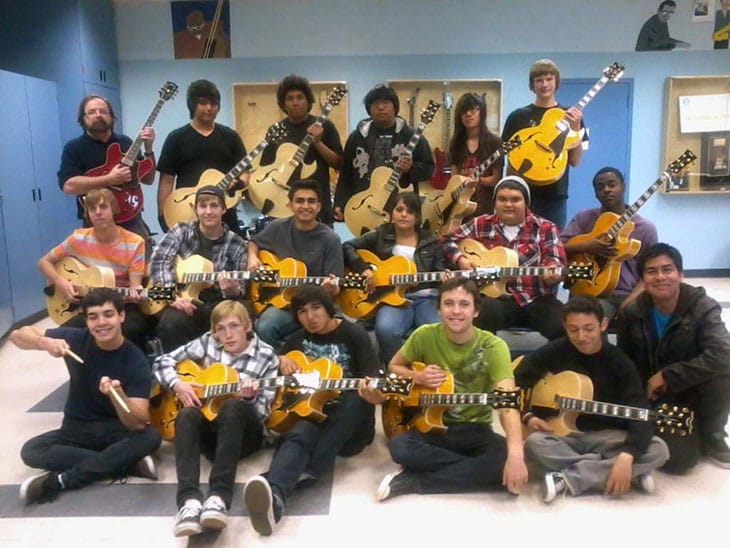 An Inspirational (and true!) Tale No jazz musician needs to be told how tight money is in this recession. Budgets are being slashed everywhere, and perhaps most in education.Now imagine that you have a class of eager guitar students but no guitars and no money to buy them.  What would you do?  Welcome to the world of Bruce Edmiston. Bruce has been teaching his guitar class at Oxnard High School for thirteen years, focused mainly on jazz guitar. He tells us: “I inform everyone from day one that I teach music and that we will be using the guitar as the instrument to bring that music …

Volumes One & Two $24.95 Each For Entry Level Jazz Guitarists www.RobertConti.com 888 – JAZZ DVD In 2004 I had become aware of Robert Conti and his education products via an ad in JJG magazine.  I was originally intrigued by the rave reviews and also wondered how and why this guy had “flown under my radar” of awareness. So, I checked out the website, was very impressed with his playing (especially the chord melody things) and saw listed a series of “Source Code” books that were available. I was particularly interested in the “Precision Technique” book because it seemed to …

Robert Conti has been a name notorious in the guitar world for years. Robert is known among guitarists as a very prolific composer, clinician, and educator. Robert’s credits include a series of instructional DVDs/videos and books much sought after by any serious guitarist. Robert has, blazing chops combined with musical taste.

To The Brink! Robert starts this original composition with an incredible fire. The composition is appropriately tiled with all the energy of taking great musical abilityto the brink. Robert shines with a diverse and interestingly array of technique. The head is played with guitar and sax. Robert starts off his solo in a blistering array of chops and doesn t let up until he releases it to Rocco Barbato who then takes the be-bop lines that Robert threw out and continues with a very soulful solo. Billy Moran follows with a wonderful and soulful organ burning solo as well. Of course, Aldo Bentivegna follows with incredible chops and an interesting drum solo that would make any drummer stand up and listen. Robert and Rocco trade off of each other for several choruses. It seems that neither is at a loss for ideas and each spurs the other on to take chances.

Anticipation, This Mark Stefani penned composition is a bossa nova that is tasteful and well executed by Conti and his band mates. Again, Rocco Barbato tastefully weaves a beautiful solo, but now on the soprano saxophone. The sound is one that is well suited for this Latin number. Robert plays a solo reminiscent of Pat Martino type feel. There are some very funky moments throughout ala George Benson as well. Robert blows through with a quite impressive array of double stops to push the solo forward. All said and done, very impressive. Pork Loin! This original Robert Conti selection is a blues that swings hard and funky. Robert chooses to incorporate a beautifully mastered use of impressive funky style techniques that reminded me of Howard Roberts on the Goodies album. Robert also effectively uses tri-tones double stops as he comps very nicely behind Rocco and Billy’s solos. I have to say that Robert s sensitivity and feel are evident as a true blues man. The feel is an extremely relaxed feel. Here s That Rainy Day, Robert takes this well know standard and does a beautiful rubato solo melody and chord up until the rhythm section joins him for this very pretty ballad. The harmonic choices are especially unique especially in the lower register of the guitar. Again, Robert sensitivity comes through in a very relaxed and calm way. So To Speak, This is another one of the brilliant Mark Stefan s compositions. This has a Henry Mancini type theme that has a haunting melody. Robert delves right in with all the confidence of a true master. The use of Robert s whole-tone lines is very effective and appropriate for this tune. Rocco again delivers a soulful solo with Billy s first class organ solo pumping up the fever for more inspired soulful type licks. A very serene and relaxed song.

Pit Stop, Robert shows his strong blues background on this original Conti composition. Many jazz guitarists approach the blues from strictly a jazz upbringing. The problem with this is that they miss that authentic blues development in their feel and soul. Not Robert, Robert obviously has spent quite a bit of time in this arena. The blue lines certainly are those of a seasoned blues player playing over the blues. The funk double stops are very tasteful as well.

Our Love is Here To Stay, Robert takes a slow rubato approach to the head with his strong use of harmony, bass lines and wicked technique to open up to this beautiful rendition of this Gershwin standard. Robert swings hard to a back-up of brushes and organ stops. Robert s technique is relentless. Robert s knowledge of chordal arranging and single line playing during this song and all of the CD shows that he is a master jazz guitarist.

Mister Twister’s Fanfare, Another of Robert s original compositions on this CD, Mister Twister’s Fanfare again shows Robert s talents as a composer with interesting melodies and nicely placed harmonies against an slamming back beat. Again, Robert pulls out all the stops. I believe that this is a showcase for Robert s soulfulness and amazing chops. Robert s command and I do mean command of the guitar is very impressive. The Hooker! Again Robert takes this original Conti composition to a very high level. Very wonderful listening.

Overall, Robert Conti s Cd, To The Brink does just that. Robert and his band mates take you on a fabulous and soulful ride to the brink. Robert is funky, dirty and a mean street player. This CD is well worth adding to anyone’s collection of great jazz guitarists. Robert Conti is just incredible!!

Anybody so into jazz guitar that they think they’ve seen it all may want to take a gander at the video clips on Robert Conti’s website.  Chances are they’ll end up joining the growing ranks of those who start wondering where he – or we – have been. It could be chalked up to the “flying under the radar” maxim, but get to know  Conti’s inconceivable chops, astounding technique, and downright revered teaching materials, and it seems more likely he’s simply been flying above it.  A Philly native, Conti grew up with  fellow jazzer Pat Martino, was gigging on the road by his early teens, has released a number of …

“To The Brink!” restates everything that folks are finding out about Robert Conti: he is one of the very top modern jazz guitarists. He possesses incredible technical chops  that ALWAYS deliver great solo lines. He is an encyclopedia of harmonic invention who effortlessly performs lyrical, satisfying chord solos. But, what is not often publicly stated about Conti is that he is a superb accompanist and “comper.” His support of others is sensitive, never obtrusive, yet very inventive and refreshing. The CD is a textbook about how jazz guitar comping is done. And finally, like the great Art Blakey, Conti is a wonderful bandleader who coaxes the …

by Jerry Fink World-class guitarist Robert Conti mesmerizes fans with his musical wizardry. The 57-year-old native of south Philadelphia probably could be a monster success on the national and international concert circuits, but he is content with his new gig performing for diners at one of the area’s newest restaurants. . . To read the full article, click here

Share on facebook Share on twitter Share on email Share on linkedin The name of Robert Conti first came to my attention in the summer of 2000, while I was thumbing through an impressive Just Jazz Guitar review of a Conti performance in Beverly Hills, California. Later that year I had the pleasure of becoming acquainted with Paul Getty through his visits to my educational website. During a telephone conversation, the Conti name surfaced once again when Paul convinced me to visit and spend an hour at Robert’s website. Little did I realize what I was about to see and hear. …

http://www.mi2n.com/press.php3?press_nb=16127 Robert Conti Takes Mp3.Com By Storm ! Email: [email protected] Website: http://robertconti.toptempo.com Music: http://artists.mp3s.com/artist_song/1057/1057208.html Jazz Guitarist Robert Conti has reached the #1 Position Overall on the MP3.com website in only 1 Month after VisionMusic.com (the top Jazz Instruction Guitar Website on the Internet) and David Blumberg (the #1 Ranked Artist Roster Promoter on MP3.com for 8 Months) started him on the site. “It was a combination of being featured on MP3.com, David’s www.toptempo.com affiliate site front page, visionmusic.com, and a lot of really hard work that did it” Conti said. His song “Death by Chops, Dis’ll Do It!”, The Guitarist’s …