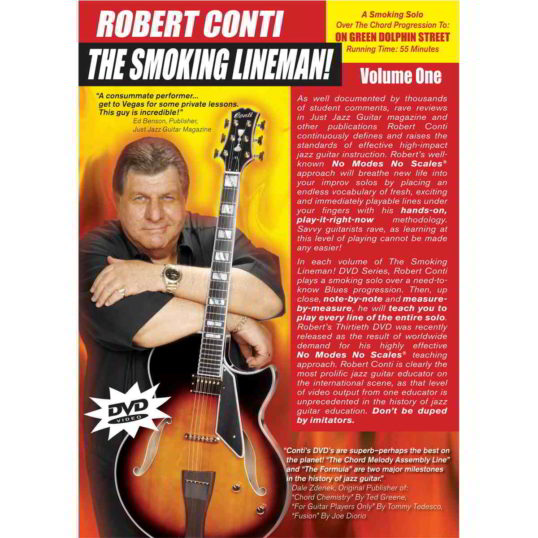 Almost guaranteed to be heard at every jam session or jazz gig – Don’t be like a deer in the headlights when it’s your turn to solo.

Lesson solo over chord progression to: On Green Dolphin Street

Originally released on VHS in 2001

You must get the idea out of your head that you’re “just learning someone else’s solo.” When a child learns to speak, he/she emulates words that they have heard before. No one says to the child, “you’re just learning someone else’s words.” The child learns a word, then another word. The pattern continues until the child can speak in complete sentences (and without knowing the “theory” behind language.) As you develop your jazz vocabulary, you’ll soon reshape the ideas for applications over other tunes. These DVDs are for you if you’ve got serious chops, but don’t know what to do with them. If you practice modes and scales all the time, that’s what your solos will sound like – boring and uninteresting to say the least. Learn hip jazz lines, and have lots of fun doing it.

hello, its been 2 years now since i got my first robert conti dvd. i just played the long version of green dolphin pretty well, and it keeps getting better. lots of chord melody and other solos as well. im very happy with my playing. thanks for everything

I really enjoy the video, and DVD lesson. I studied music at Musicians' Institute in Los Angeles California. I then formally studied Jazz Guitar as a Music Major at the University of Southern California. As a child, I studied classical guitar at the Conservatory of the Arts in St. Louis, Missouri. I studied formal musical notation for a long time, and I have renewed my interest in playing music. I performed as a professional musician throughout the 1980's and 1990's. I enjoyed the opportunity to work as a studio musician during this time, and I found this video lesson indispensable.

Thanks for the MIDI files. The DVD it's great and I'm studying the phrases and practicing in all tones. Mr. Conti has a lot of swing and he is a great musician and teacher; please say to Mr. Conti that, here in Madrid, has a fan!Thanks and best regards,Nicolas

I've had occasion to purchase a lot of music instructional material over the years, but Robert Conti's DVD's certainly seem to be the most well thought out and best presented learning aids I've found yet. I'm sure I'll be purchasing more of his material as time passes. Best regards, William M. RedaAddison, IL

Mr. Conti, Last year I heard a guy trying out an archtop at the Guitar Center in Hollywood and he sounded great. I told him how I had been trying to learn that style for ten years with videos by several jazz legends, with no improvement. He said, get a few Robert Conti DVDs and lock yourself in a room. That day I ordered the first Smoking Lineman DVD. I was so happy with the results I got from that first video, I got two more and want to get the rest just as fast as I can learn. You're the only teacher who has been able to help me start to play and sound like a real jazz player, thank you!

B
B.K.-.O.C.C.
Highly recommend all material on this site!

Well, I stumbled across Robert Conti's website while searching the web for Jazz Improvization tips for Green Dolphin Street. My jazz combo really wants me to take off on Green Dolphin Street. So, I was in search of some great ideas...I FOUND THEM! Robert's version is perfect! I can't play it at the same tempo..but the jazz lines will still work for me. I was using a .73mm pick..but know an ultra thin pick is what Robert recommends...I agree! Highly recommend all material on this site!

J
J.G.-.C.I.
He speaks a language I can understand

Wow,I just received the smoking lineman series! Mr. Conti is not only a great player, but a great teacher as well. These DVD's are unbelievable! The way he goes over each line including the slowed down examples, makes it easy to learn his complex hip lines. He speaks a language I can understand. Thanx for such an incredible series and taking the time and sincere effort to convey this material to others.