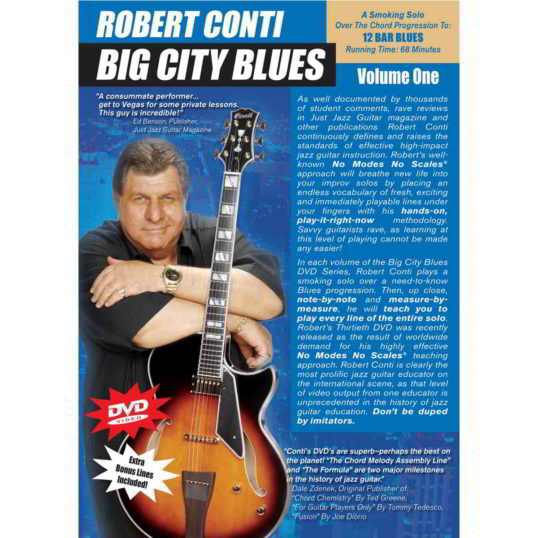 The first and best seller in the Big City Blues DVD series. Conti walks you through a complete solo over the standard 12 bar blues progression.

You must get the idea out of your head that you’re “just learning someone else’s solo.”  When a child learns to speak, he/she emulates words that they have heard before. No one says to the child, “you’re just learning someone else’s words.” The child learns a word, then another word.  The pattern continues until the child can speak in complete sentences (and without knowing the “theory” behind the language.)  As you develop your jazz vocabulary, you’ll soon reshape the ideas for applications over other tunes.  These DVDs are for you if you’ve got serious chops, but don’t know what to do with them.  If you practice modes and scales all the time, that’s what your solos will sound like – boring and uninteresting to say the least.  Learn hip jazz lines, and have lots of fun doing it.

...and am now working on your chord method and I just got the 12 bar blues book. Wow,,,,your blues feel is great, the lines are fantastic, I am only through the first 12 measures and it's tough but the results are worth it. Don't know if I will ever get to play out again or meet anyone else to play with but just the satisfaction of being able to play these solos is enough. I only wish as a sidebar you would include a simple melody instruction for the heads of the songs, I am still struggling with the backing tracks a bit as to where to come in. In closing I just wanted to thank you, I know this is your living but I truly believe you care about people and it comes across in your videos, I may never get to meet you but your my buddy for at least four hours a day and I feel like I already know you. So once again Thank You Mr. Conti I will continue on and continue with your products, they are the Best!

J
Jerry Martin - Florence, OR
Best without exception I have ever experienced... (Pt. 1)

Dear Mr. Conti, I don't know if this is the proper place to contact you but in your videos you always say email and let you know about the DVDs...I am just on project 4 in the TTI#2 and just received the TTI#3. I am an older student, 68 to be exact, and have in the past played in a CW band for nine years. Always wanted to play Jazz and since growing up in Chicago have seen the greats, talked to Wes in a little club called the Wooden Nickel many years ago at a 2 dollar matinee no less and also saw Benson and many others in small clubs before fame came. As to your DVDs, I never knew of you till the last year or so and now I am your Number One fan for sure. I Love to hear you play and your teaching method is The Best without exception I have ever experienced hands down!!!! You are the first to lay it out where I can truly understand, I now use your picks and use the exercise book religiously, and you're the first teacher I have ever had that I believe in 100%. I have struggled to get through these first two CD's...

I've just run through the 12 Bar Blues lesson. I'm an ancient (66) rock guitarist, still gigging, but I've tried for years to do the modes/scales approach. I've no hesitation in saying that this was a breath of fresh air, and I'll certainly be getting into the DVDs. One small thing - most rockers play in E,A,G,D or C! I know jazz has to be in B or E flat, for the horn players, but maybe a couple of introductory sessions in keys we Neanderthals are used to would be nice. That part - brilliant. Dave

I'm a semi-pro who lives in NC and plays in the NC, VA, TN triad. Just ran through the two disks I ordered. The lines in the 12 bar blues disk are nicely laid out. I already know a lot of licks similar to these, but Bobs approach to finger positions, finger efficiency, and this straight forward approach to teaching the lines is great, and a big help in learning new stuff. I can always come back and study the underlying theory later, but I can still benefit from what he has to teach! Take care, and condone to Mr. Conti my appreciation for his efforts. Some of the better players I know are pretty proprietary about their chops, and don't like to share this openly. Its great to see someone this good who is so open and seemingly dedicated to passing on his knowledge to others.Peace,Paul

Mr. Conti, A friend of mine plays guitar and is pretty good. One day He lent me a VHS tape of you. Its the 12 bar blues one. Anyway, I watched it and was impressed with your obvious talent and love for music. The way in which you teach makes it possible to learn the material with much greater ease and speed compared to using just books. I returned your tape to my friend. That same day I came home, went online and bought your 12 bar blues video. I can't wait till I get it. I'm going to learn all of it. Thanks for sharing your knowledge with us. I can play, but I haven't mastered it yet. Someday... Thanks again.

After many years of playing keyboard, I have recently wanted to study guitar. I presently live in a small, remote section of Nevada with no access in a reasonable distance to a teacher. Am looking forward to learning tools that will expand my knowledge of the guitar.

Bob: Thought I'd drop you a line, because in your video you said you enjoyed getting e-mail. I own all Three Videos plus Two of your books. If anyone who buys your videos does not improve their level of play, it's only because their level of ability will not allow them. Only the Blues is very easy to understand and duplicate (however, it did take a little time getting the timing down) I also got all the lines to The Sound of Rio. However, the timing was difficult along with sweep picking and speed. But in time I'm sure will be just fine. I prefer the videos simply because all you have to do is copy exactly what your doing, then practice the lines till you have the results your looking for. As I said in my last e-mail, as soon as you have a new video, please e-mail me. I enjoy the blues most. But they are all good.