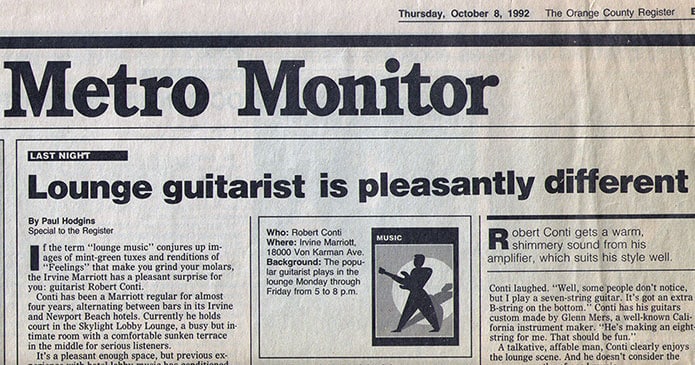 Special to the Register if the term “lounge music” conjures up images of mint-green tuxes and renditions of “feelings” that make you grind your molars, the Irvine Marriott has a pleasant surprise for you : guitarist Robert Conti .

Conti has been a Marriott regular for almost four years, alternating between bars in its Irvine and Newport Beach hotels. Currently he holds court in the Skylight Lobby Lounge, a busy but intimate room with a comfortable sunken terrace in the middle for serious listeners.

It’s a pleasant enough space, but previous experience with hotel lobby music has conditioned us to expect the worst : inept musicians or even computerized “player” pianos with all the charm of Leona Helmsley’s smile.

Hearing Conti’s warm, assured playing caused more than one preoccupied businessman to look up from his work. His style is familiar yet refreshingly innovative, and at first it’s hard to put a finger on what makes it unique. There’s plenty of Joe Pass and Wes Montgomery in his sound, to be sure, but there’s also a full, resounding bottom end and luxurious chordal voicings.

Standards such as “One Note Samba,” “A Man and a Woman” and “What Are You Doing the Rest of Your Life” were all given respectful yet imaginative readings, and Conti never let his improvising stray too far afield. his affection for melody and hi~; rock-solid rhythmic sense add to a satisfyingly complete and well-rounded solo style. Conti gets a warm, shimmery sound from his amplifier, which suits his style well.

When asked about the fullness of his sound, Conti laughed “Well, some people don’t notice, but I play a seven-string guitar. It’s got an extra B-string on the bottom .” Conti has his guitars custom made by Glenn Mers, a well-known California instrument maker. “He’s making an eightstring for me. That should be fun .”

A talkative, affable man, Conti clearly enjoys the lounge scene. And he doesn’t consider the venue unworthy of good music.

“Look, even if people don’t know the subtleties of jazz, they can still appreciate terrific music when they hear it,” he said. “At first, they might not pay any attention, but after a while, they start listening a little more closely.”

Sure enough, as he wound up a hummable, hard-swinging version of “The More I See You” during his second set, Conti received what few lounge musicians even dream of hearty applause.